Diversity, Politics, and Education in 2018

As an educator, I cannot fathom how many times recently I've heard somebody on television,  on social media, and in my professional discussions utter the sentiment that politics do not belong in schools.  People who hold firm to this belief often fall into one of the following two camps:

1)  Some believe complex social issues should be completely avoided in school and replaced with less controversial topics like "should we serve ice cream in the cafeteria?" or "should we allow kids to listen to music" or the ever-popular-beaten-to-death topic that has been used so frequently, its essays can blanket the world:  "should we have uniforms in school?"

Unfortunately, focusing on superfluous topics like these have some major flaws:

Let's remove these meaningless writing tasks from the table for a moment and consider the other argument that individuals often make when arguing that politics and schools should not mix.

2) Some believe teachers do not have the right to voice their political viewpoints in front of their students.  Thankfully, unlike the first scenario, students have the opportunity to discuss currently worldly issues that they care about with an adult steering the conversation.  Advocates of this camp believe teachers should impartially show both sides of an issue.  Additionally they believe we should provide instruction on critical reading skills and thinking skills, allowing to form their own opinion about what side of the issue they fall.  Up until a few years ago,  I probably would've agreed with these people vehemently that teachers personal opinions must never exist inside the four walls of a classroom.  In fact, even today, I would argue that it is not my role as an educator to create a roomful of like-minded individuals who see things the way I do.  I would also argue that this is not the job of the parents either.  However I now recognize that times exist where teachers must step in when these difficult conversations are had and if this behavior is perceived as being political, so be it.

Imagine, for example, that the teacher is leading a discussion on immigration policies.  The teacher's main objective, before all others, should be to provide a classroom environment where all students feel safe and welcome.  If students begin making comments when discussing immigration that can be perceived as derogatory or interfere with the sense well being of other students in the room, it is the teacher's duty to step in and remind students when comments do not align with the school's vision that all students are respected.  Is this a political decision?  Yes, and I would argue a necessary one.  Furthermore, when the actions, words, or decisions of people in the news infringe upon the inclusive belief systems of our public schools , educators must join the conversations and make it clear that these actions do not align with the core beliefs we have established as a school system.  We cannot allow marginalized voices to continue to be squelched.

One way to lend voice to those who have not had one in the past is by rethinking what we consider to be a "classic" piece of literature.  If I were to ask you to list a few literary "classics," which titles would you give to me?  Perhaps you would list off some works that you read years ago in school?  Works by artists like Shakespeare, Dickens, Hemingway, or Whitman?  How many titles would you give me before a person of color or female made a list?  In a recent interview on "The View," thirteen-year-old Marley Emerson Dias discussed her experience with the classics in school, explaining how not being able to see oneself in the texts that were read can affect the self worth and identity of students everywhere.

Although we are still worlds away from ensuring that all perspectives are equally represented and dignified in schools today, we are making progress.  Campaigns like We Need Diverse Books and Own Voices are aiding in the publishing world's quest to turn out literature that is reflective of the diverse population of readers across America.  Recently, Nic Stone, author of young adult title Dear Martin celebrated her success after visiting a school and serving as a role model to girls everywhere. The more we expose students to a myriad of voices and perspectives in the classroom, the better off we all will be. 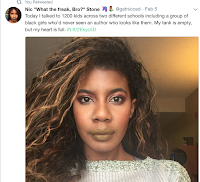 In a recent article titled "No Longer Invisible:  How Diverse Literature Helps Children Find Themselves in Books, and Why It Matters" by the National Council of Teacher of English, we are reminded including diverse literature in schools is rewarding for all students because it enables students to learn about the backgrounds of those who are unlike them and develop empathy for their peers and for the world (p. 14).  Diversity is not just about skin color but also about "racial, ethnic, and cultural differences...disabilities, sexual orientation, and religious belief" (14). By providing a safe space where all cultures are explored and honored, teachers foster an environment of critical thinkers who are also empathetic about the experiences of others and the world improves as a result.

Ultimately, we cannot avoid political discussions in schools, nor should we.  In fact, I would argue that politics are just as involved in decisions to exclude content as it is to include it.  If we opt to discuss whether or not ice cream should be served in the school cafeteria in lieu of timely discussions regarding immigration policies, for example, we are making a political statement.  Do we really want to send the message to students that their views or worldly issues are unimportant or not worthy of time to explore them?  Do we want to avoid teaching kids how to analyze tough topics in our own nation with a critical eye? Do we want to raise a next generation of adults who are ignorant about the daily ongoings of society? Isn't that how we ended up here in the first place?

I leave you with a quote from Disruptive Thinking by Kyleen Beers and Robert Probst who remind us that reading helps build informed citizens: "We want to ask kids to be open to the possibility that a text might be disruptive, and it is that disruption that gives them the opportunity to learn and grow.  Reading should be disruptive"  (61).

So skip the school uniform lesson and tackle the topics that kids are talking about anyway. Who knows?   You just might learn something along with them.
Posted by Unknown at 12:43 PM